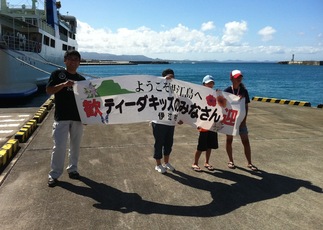 Back in the spring, when Fukushima Prefecture asked the rest of the country to host its kids from the fallout zone, Okinawa was the first to volunteer. And on Okinawa, it was the residents of Iejima Island who were the first to open their doors for free to the young evacuees.

Last week, I was on the ferry to Iejima with half a dozen of these kids. They were home and sea-sick and pale - and when an Okinawan boy asked them (half-jokingly) why they were so white, they said they hadn’t played outside since the meltdown and when they’d walked to school, their parents had made them wear long-sleeve shirts to cut down on the radiation.

Two days after arriving on the island, I saw the same kids again. This time, they were sunburnt and laughing as their 75-year old home-stay father (a sugarcane farmer dressed in bright pink shorts) taught them how to snorkel from the beach. Another old woman peeled mangoes, while a third poured homemade blueberry syrup and condensed milk over bowls of shaved ice.

The people of Iejima had their own brush with nuclear armageddon in the late-1950s when the U.S. military tried to install Nike missiles on the island. The farmers successfully resisted that plan. But a dummy nuke dropped by the Americans and now displayed in the local museum is a reminder of how close they came.

Last week, as I watched Iejima’s farmers looking after Fukushima’s refugee kids, I remembered what makes me love Okinawa so much. Okinawans are among the kindest, most beautiful - but most discriminated against - people in the world. Their stories need to be told - and I will continue to try my very best to tell them. 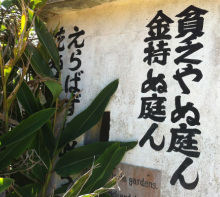