Agent Orange secretly buried at US air base in Japan, some veterans say 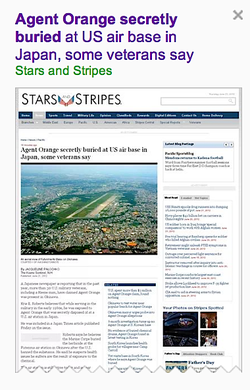 A Japanese newspaper is reporting that in the past year, more than 30 U.S. military veterans have claimed Agent Orange was present in Okinawa.

One of them, Kris E. Roberts, believes that while serving in the military in the early 1980s, he was exposed to Agent Orange that was secretly disposed of at a U.S. air station in Japan.

He was included in a Japan Times article published Friday on the issue.

Roberts says he believes the Marine Corps buried the herbicide at the Futenma air station in Okinawa after the U.S. banned the substance. He said he suspects health issues he suffers are the result of exposure to the chemical.

The air station is still active today and is near residential areas, the paper said.

“While we respect the veteran’s service, the Department of Defense has found no records of Agent Orange being used, stored, disposed or transported through Okinawa,” Wilkinson said in an email.

During the Vietnam War, the U.S. military sprayed millions of gallons of Agent Orange and other herbicides on trees and vegetation, according to the Department of Veterans Affairs’ website. This strategy removed any foliage that could be used for hiding.

The Futenma air station was used as a supply post for the American military during the Vietnam War, according to Captain Kendra N. Motz, a spokeswoman with the U.S. Marine Corps.

Roberts, who serves as a city councilor, Keene Board of Education member and is a state representative, said his doctor told him during a recent visit to the VA Medical Center in White River Junction, Vt., that he had been exposed to Agent Orange. He now believes many of his health problems, which include prostate cancer and heart issues, are related to the substance.

Roberts was serving as the head of maintenance at the air station during the summer of 1981 when his supervisor told him and five others to dig up an area near the runway that had a high reading of chemicals in the water, he said.

The men found more than 100 buried barrels, Roberts said. Some of the barrels had orange rings around them, while others were leaking.

“I just had a gut feeling something was wrong,” he said.

The Department of Defense has no records of the barrels, Wilkinson said.

But Roberts said it appeared that no one would be keeping any records of the barrels that day.

The barrels were quickly taken away in a truck, he said. And although it was required with other projects that Roberts turn in photos to show how the process went, his superiors told him photos were not required with this project.

Still, Roberts snapped some with a Polaroid camera.

He believes his health problems started just a couple of months later. While on the military base, Roberts, who had been a marathon runner, went for a run and passed out.

Exposure to Agent Orange is believed to cause diseases, including prostate cancer, Hodgkin’s and Parkinson’s diseases, according to the Department of Veterans Affairs’ website.

Roberts has suffered numerous health problems since 1981, including prostate and thymoma cancer, asthma and heart problems. Thymoma cancer is a rare disease in which cancer cells form on the outside surface on a small organ that lies under the breastbone.

Although other doctors had told Roberts that his health problems could be because of chemical exposures, he never thought of Agent Orange.

Roberts, now 57, spent time in other places around the world, including Saudi Arabia, and assumed he could have been exposed to chemicals from any different site.

He didn’t think it could be Agent Orange until his doctor mentioned it at his checkup five months ago.

Roberts, who has since retired from the Marine Corps, had often wondered what was in the barrels, he said. Since the early 1990s, he wrote letters and called the U.S. Marine Corps asking, but his messages would go unanswered, he said.

If it was Agent Orange in the barrels, he worries.

The other men that helped Roberts uncover the barrels might not know they could have been exposed to a dangerous substance, he said.

The men had no special equipment or gloves on. Some weren’t even wearing shirts because of the heat.

“They may have (health) problems and not know why,” Roberts said.

Roberts says he wants the Department of Veterans Affairs and U.S. Marine Corps to contact the other men and let them know what was in the barrels.

“That’s the moral thing to do,” he said.

Only veterans who served in Vietnam between 1962 and 1975 are eligible for health benefits from exposure to Agent Orange.

Veterans who might have been exposed to herbicides during a military operation or as a result of testing, transporting or spraying herbicides for military purposes are also eligible.

On its website, the Department of Veterans Affairs lists Cambodia, Canada, India, Korea, Laos, Puerto Rico, Thailand and Gulfport and Johnston islands as locations where Agent Orange and other herbicides were tested and stored. There are no Japanese sites listed.