The basics: Agent Orange and military defoliants on Okinawa 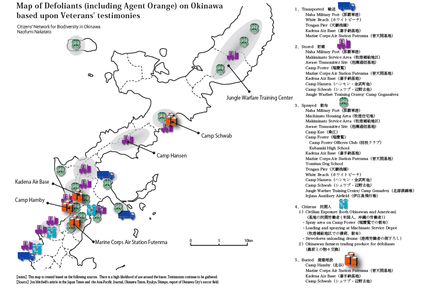 Some of these veterans maintain that defoliants were sprayed on the island to keep the fence lines, roads, antenna farms and runways clear of vegetation; others allege surplus and damaged barrels were buried on Okinawa since it was cheaper than shipping them back to the United States.

Many of these former service members are sick with illnesses identical to those suffered by U.S. "boots down" Vietnam veterans and Vietnamese people exposed to the same defoliants – some of their children are sick, too.

These veterans possess color photographs of defoliant barrels on Okinawa.

Japanese civilians who were employed within the U.S. bases at the time corroborate their accounts.

Moreover, Pentagon official records support the presence of military herbicides on the island.

Among the paper trail proving that defoliants were present on Okinawa during the Vietnam War is a 1971 Department of Defense document about Agent Orange citing a herbicide stockpile at Kadena and a US government report stating that there were 25,000 barrels of Agent Orange on Okinawa in the early 1970s.

In 2013 and 2014, more than 80 barrels were unearthed from former U.S. military land that used to belong to Kadena Air Base. Tests on these barrels revealed the presence of the telltale markers of defoliants - the herbicides 2,4,5-T and 2,4-D plus TCDD dioxin. Japanese and international scientists concluded this was irrefutable proof that the U.S. military had stored these toxic defoliants on the island.

Currently the U.S. government pays some veterans for illnesses caused by exposure to dioxin military herbicides on Okinawa. These include a former marine truck driver exposed in the early 1960s, a veteran exposed to defoliants from tainted retrograde gear in the 1970s and a service member sickened by Agent Orange while driving it from Naha Port to Kadena Air Base in the late 1960s. The latter case took almost a decade to be decided.

For more detailed information, please read the page on this website, Agent Orange on Okinawa, and visit the Agent Orange Okinawa Facebook page.