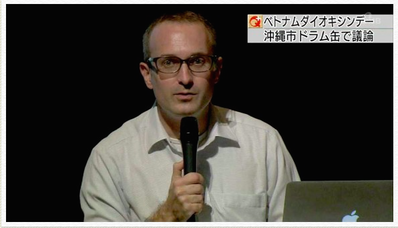 Jon Mitchell is a British journalist and author based in Japan.

In 2015, he received the Foreign Correspondents’ Club of Japan's Freedom of the Press Lifetime Achievement Award for his investigations into human rights issues on Okinawa. In 2021, his book, Poisoning the Pacific, won Second Place in the Society of Environmental Journalists' Rachel Carson Environment Book Awards. Mitchell's research has also featured in reports for the U.S. Congress and been the focus of debate in the Japanese parliament.

Mitchell is the author of two Japanese books about military contamination - Tsuiseki: Okinawa no Karehazai (2014) and Tsuiseki: Nichibei Chiikyoutei to Kichi Kougai (2018), and coauthor of Japan's first book on the dangers of PFAS, Eien no Kagaku Busshitsu (2020). Since 2021, he has co-directed two documentaries for Okinawa TV station, Ryukyu Asahi Housou, about environmental issues, including "Nuchi nu Miji - Okinawa's Water of Life" (2022).

​In 2020, Poisoning the Pacific was published by Rowman & Littlefield, detailing how military operations have harmed indigenous communities with toxic substances; Noam Chomsky called the book, “an eloquent call to bring this tragedy to an end without delay.”

Defoliated Island, a TV documentary about Mitchell's investigation into the usage of Agent Orange in Japan, was winner of a 2012 award for excellence from the Association of Commercial Broadcasters - a first for a foreign journalist. In 2016, the follow-up program was winner of Japan's top TV documentary award. In 2021, he co-directed a TV documentary with Ryukyu Asahi Broadcasting Corporation, Forever Chemicals: How the US Military Contaminated the Drinking Water for 450,000 Okinawans.

Outside Okinawa, his investigations into the decades-long pedophile scandal at Japan's most famous international school prompted an independent enquiry, new school guidelines and compensation for survivors.

In 2011, Mitchell traveled to Tohoku to report on relief operations following the 3.11 earthquake and tsunami. His poems based upon those experiences led British media to call him "Bard of a Broken Country" and the work was published in an acclaimed collection titled March and After to support ongoing volunteer activities.

Mitchell reports as a special correspondent for Okinawa Times. He is an Asia-Pacific Journal associate, visiting researcher at the International Peace Research Institute of Meiji Gakuin University and member of the Society of Environmental Journalists.

Mitchell's latest features - and press coverage in English and Japanese - can be found here.
Mitchell's investigations have revealed extensive military contamination on Okinawa; this work has helped exposed veterans to receive aid from the U.S. government. He has also uncovered photographs confirming the deployment of atomic weapons to the island and its secret role during the Cuban Missile Crisis. This research forms the basis of a permanent exhibit within Okinawa's sole surviving nuclear silo at the World Peace Centre, Onna Village.

Among Mitchell's other investigations are unseen images of the 1970 Koza Riot - Okinawa's largest outpouring of anti-military sentiment - and evidence the Pentagon tested chemical weapons on its own troops on Okinawa during the 1960s. In 2013, Mitchell broke news about the Cold War disposal of tons of chemical weapons - including nerve gas - near Okinawa's coast and the dangers the dump still poses today.

In 2016, further research revealed US Marine Corps orientation lectures for new arrivals on Okinawa denigrated local residents and downplayed military crimes. Following public outrage, the briefings were revised and their contents made more transparent.
​
Mitchell regularly gives lectures to inform the public about how to use the US Freedom of Information Act and the impact of military contamination on Okinawa. In 2014, he delivered the keynote address at Okinawa's first international symposium on chemical weapons and in the following years he has given lectures aboard NGO PeaceBoat on its voyage between Yokohama and Vietnam on issues including Agent Orange, press freedom and journalism in Japan. 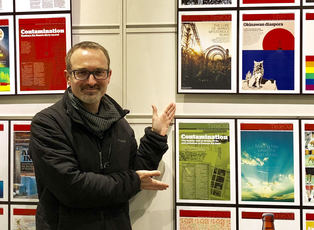 Mitchell's Okinawa articles on display at The Japan Newspaper Museum, 2017.